4 Famous Project Managers - What We Can Learn 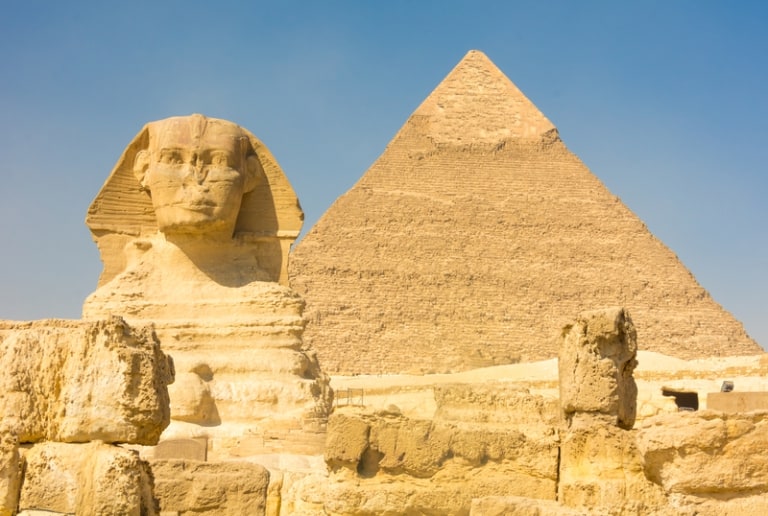 Looking back in time can be difficult. Some of these top project managers were recent, but the earliest dates back over 4,000 years. Each, however, has lessons to share with us.

There are famous project managers who take instructions or blueprints and make them happen. Others, like Imhotep and Gustave Eiffel much later, not only built their monuments, but they designed every piece of their creations and often oversaw manufacture personally.

Imhotep built the first pyramids in Egypt. His were stepped pyramids built of stone. More than just a builder and designer, Imhotep was also a High Priest of the Sun God Ra.

In later years, Imhotep was a god in the pantheon of the Egyptians.

The pyramid of Djoser is the earliest Egyptian pyramid known to exist. They built it between 2630 - 2611 BC. Contrary to popular belief, the pyramids of Egypt weren't built primarily by slaves but were constructed by master craftsmen who were paid to do the work.

Imhotep is unique in that he is one of the few commoners to be remembered in the ancient writings of the Egyptians, let alone one who would be elevated to the status of deity.

Although there would be millions of inventive people, the one message that is clear in Imhotep's story is that the impossible can be done. The construction of a stone pyramid built of blocks weighing hundreds of tons must have seemed insane to his peers, and yet, he built it. Also, the construction itself would have been only part of the problem; Imhotep would have had to figure out how to transport the materials, raise them onto the construction, and ensure that they would fit. All of this while needing sponsorship from the Pharaoh because, as a commoner, Imhotep himself would have not had the means to build much of anything.

It's cool when professionals all over the world, in every language, say your name every day. Henry Gantt is that guy. He invented the Gantt chart and influenced things like "industrial efficiency," the social responsibility of businesses, and the task and bonus system - that is why he is one of the famous project managers we can learn a lot from.

The Gantt chart is an ingenious invention we think little about today. At a glance, each of the famous project managers on a factory floor or working on a project can know whether they and their colleagues are on time. The Gantt chart is so powerful that even with all of today's technology, we haven't found a better or simpler way to track the progress of any project.

Gantt worked much of his life in the steel industry, as did his mentor and the creator of scientific management, Frederick W. Taylor. They worked for Midvale Steel and Bethlehem Steel, both among the nation's largest corporations.

He is also remembered for his thoughts on the social responsibility of corporations, much of which were derived from the application of Marxist principles to business management. His ideas included reasonable wages and hours, much of it to get greater efficiency and productivity of employees.

Gantt applied scientific rigor to his projects, creating a system that made inefficiencies clear to see. His political and social beliefs were decades ahead of his time but were the forebears of today's socially responsible companies that seek to reduce their negative impact on the world. Ustad Ahmad Lahori, The most famous project manager of the East

While the records aren't clear, Ustad Ahmad Lahori is said to be the chief architect and star project manager of the construction of the Taj Mahal in Agra, India.

The project for the Taj Mahal was undertaken to create a tomb for the third wife of Shah Jahan in 1631. His wife, Mumtaz Mahal, was a Persian princess who had died giving birth to their 14th child. He was so distraught that he commissioned one of the great wonders of the world to commemorate her life.

Not much is known about Lahori. He is mentioned as the chief architect and his assistant, Ustad Isa, is also mentioned.

The court records of Shah Jahan clarify that the Shah was intimately involved in the construction along with his two architects.

One of the major challenges they needed to overcome was the foundation. The Taj Mahal is built on the banks of the Yamuna River. The soil was soft and the foundation needed support.

The project required experts from all over the Muslim world. Goldsmiths from Lahore, a calligrapher from Iran, and Ismail Khan (Afandi) from Turkey, as he was the world's leading expert in the construction of domes.

Assuming he was the chief architect, he brought brilliant artists and architects from around the world to one place to build one of the world's most amazing buildings. These impresarios would have rubbed elbows with the commoners from the region, many of whom likely weren't Muslim like themselves, but Hindu. Lahori created one of the Eight Wonders of the World with a crew as diverse as any in today's multicultural cities.

Lu Youmei is the general manager of the Three Rivers Gorge project in Sandouping, Yiling District, Yichang, Hubei province, China. It is the world's largest power station and one of the largest projects undertaken in history. It's also the world's largest water conservation project.

Unlike China's Great Wall, one of the world's great wonders, this project has been built in a single lifetime, whereas the Wall took hundreds of years to build.

While the impacts on the environment and human life are open to debate, the sheer size and scope of this project should not be underestimated.

The dam spans the Yangtze River, one of the world's largest. It required 26.43 million cubic meters of concrete and at any given time, as many as 250,000 workers on the various jobs.

All of this falls under Lu. In a paper published by Ramesh Nair, Assessment 1 - Project Management, Leadership and Skills: The Three Gorges Dam - China, Nair quotes Lu on the project management style used.

Lu Youmei, the general manager of the TGD project described the project management procedures based on figure 4. This is like the 4D model as described by Maylor which allows for continuous improvements. Due to the size and nature of the project, the selection of the 4D model is suitable to ensure continuous improvements to be done when change is needed.

While this project suffered a multitude of setbacks, such as astronomical cost overruns and delays, it is a massive achievement. While we might not be able to ensure that Lu is the sole or even primary project manager, he can take the glory for creating one of modern China's greatest structures.

The scale of the project at the Three Gorges Dam rivaled that of the Pyramids of Egypt. Lu and his team succeeded in using clear, consistent guidelines like those shown above. In spite of setbacks, including loss of life, these guidelines helped accomplish in about 20 years what would have taken 50 or 100 just a century ago. The lesson is to start every project with guidelines that are clear and simple as in the chart above.

Yad is not just the leader of the Project Management Training Institute (PMTI). He helped to write significant portions of the project management standards worldwide. He is helping PMI right now in reviewing, directing, and leading the development of the 7th edition of the PMBOKֳ‚ֲ® Guide to incorporate the most monumental changes to project management standards in 35 years. He shares his wisdom with readers via the PMTI blog.