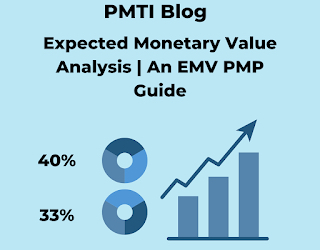 Expected Monetary Value (EMV) is a concept used in decision-making to evaluate the potential outcomes of a decision and assign a monetary value to each result. It quantifies the potential risks and rewards associated with a decision and helps individuals and organizations choose the most likely option to lead to the best financial outcome. The monetary value calculation can be used in various contexts, including financial planning, risk management, and project management. It is particularly useful in situations where there is uncertainty or risk involved. By weighing the potential outcomes against their corresponding probabilities and monetary values, individuals and organizations can make more informed decisions and allocate resources more effectively.

To calculate the EMV, you need to consider two factors:

Probability is essential in calculating a decision's expected monetary value (EMV). Probability represents the likelihood or chance that a particular outcome will occur. It is expressed as a percentage ranging from 0% to 100%. For example, there is a 50% chance that it will rain tomorrow, the probability in this situation will be 50%.

Monetary value is essential in calculating a decision's expected monetary value (EMV). It represents the financial value of each potential outcome of a decision. Monetary value can be positive or negative, depending on whether the outcome is beneficial or detrimental.

For instance, you will receive a certain amount if you win the lottery. In this case, the impact is positive. The effect will be negative if you lose money by making a bad investment.

The formula for calculating the expected monetary value (EMV) is as follows:

In this case, the EMV of the decision is -$20,000, indicating that the expected return on investment for this decision is negative, which means the company can expect to lose money if it invests in the new product.

If you want to calculate EMV, you need to do the following.

The first step in calculating EMV is identifying the possible outcomes of the decision or investment. It includes both positive and negative results and their respective probabilities.

2. Determine the Value of Each Outcome

Next, you need to determine the value of each outcome. This can be expressed in terms of monetary value, such as dollars or euros, or other units, such as points or satisfaction.

3. Multiply the Probability of Each Outcome by its Value

Once you have determined the probability of each outcome and its value, you can multiply these two quantities to obtain the expected value of each result.

4. Sum the Expected Values of all Outcomes

Finally, you can sum the expected values of all outcomes to obtain the total predicted value of the decision or investment.

For you to understand EMV analysis, here are some examples of Expected Monetary Analysis.

In this example, the EMV is $0, which means you can expect to neither gain nor lose money from this investment.

You have the option to invest $100 in a lottery ticket that has a 1% chance of winning $1 million. The EMV of this decision is calculated as follows:

In this example, the EMV is $9,901, which means you can expect to make a profit of $9,901 if you buy the lottery ticket. However, it's important to note that the actual outcome could be significantly different from the expected value due to the low probability of winning.

You have the option to invest $100 in a bond that is guaranteed to pay $105 in one year. The EMV of this decision is calculated as follows:

In this example, the EMV is $105, which means you can expect to make a profit of $105 if you invest in the bond. Since the probability of this outcome is 100%, you are guaranteed to receive the $105 return on your investment.

In this example, the EMV is $5,000, which means you may lose $5,000 if you purchase the car. This is because the expected value of the vehicle at the end of its lifespan is $5,000, which is less than the cost of purchasing the car.

Using EMV analysis, the homeowner can calculate the expected monetary value of installing the security system as follows:

It's important to note that the EMV is just one factor to consider when making a decision. Other factors, such as your personal preferences and risk tolerance, may also influence your decision.

Some of the benefits of EMV in decision-making are as follows.

While EMV can be a valuable tool in decision-making, it is essential to be aware of its limitations. Some of the limitations of EMV analysis are as follows.

To sum it up, EMV is a powerful tool for decision-making that can help decision-makers quantify the potential outcomes of a decision and identify the most likely option to maximize their expected financial gain. It is particularly useful in situations with uncertainty or risk involved and can be applied in various contexts to help decision-makers make informed choices.

While there are limitations to EMV, it can still be a valuable tool when used in conjunction with other decision-making techniques and a thorough understanding of the potential risks and uncertainties involved.

Yad is not just the leader of the Project Management Training Institute (PMTI). He helped to write significant portions of the project management standards worldwide. He is helping PMI right now in reviewing, directing, and leading the development of the 7th edition of the PMBOK® Guide to incorporate the most monumental changes to project management standards in 35 years. He shares his wisdom with readers via the PMTI blog.